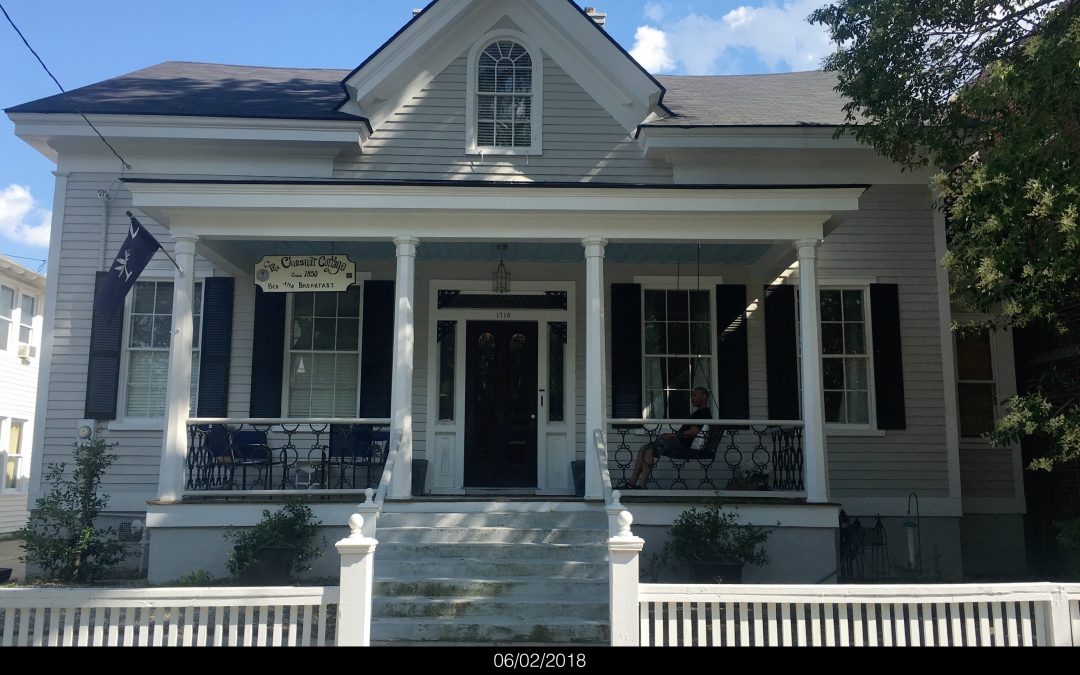 Sometimes, you just need to getaway. Even if it means a 20-minute drive from your suburban community to a cozy cottage smack dab in the middle of downtown.

In December of 2017, we relocated from Savannah, GA, where we had lived for almost two and a half years, to Columbia, SC. We moved into our new home at the beginning of December, which meant we had just enough time to maneuver a resemblance of Christmas amidst a never-ending barrage of moving boxes and packing paper. Once the holidays passed we settled into the idea of actually settling in and began to acclimate ourselves to our lives in a new area. Seven months in, we had pretty much gotten into a familiar routine when my husband and I realized that we had not yet come up for air.

My husband had hit the ground running in his new building with his longtime employer in October of 2017, two months prior to the actual family move, and I had been busy setting our children up with their online school program, unpacking, joining my sorority’s local chapter and becoming active so that I could make acquaintances quickly, and tending to all of the things that can and do go wrong when you move into a new home. By the time June of 2018 had rolled around, we realized we just needed a moment.

After some discussion, my husband found a B&B and booked our reservation. When the day came for us to leave, I had no idea where we were going but was excited as I settled into the passenger’s seat for what I thought was going to be an extended ride. You can only imagine my surprise when he started taking the familiar exits into downtown Columbia. I have to admit, for a split second, I was slightly disappointed because going downtown was already so familiar. I mean, I was going into downtown two, sometimes three times a week for one thing or another. Downtown was not my idea of a “getaway”. Yet, I decided not to be a party poop and ruin our weekend before it had even started, and remained optimistic and curious as I honestly had no idea what was in store and knew it would be unfair to judge an experience based on my very limited experience of Columbia.

As we turned down familiar streets my curiosity grew, especially when we turned off Bull Street onto Hampton Street and passed a large post office that I didn’t know existed. See what I mean about my limited experience of Columbia? Yet, to my surprise, just a short way up the street, positioned amongst other homes that also looked to be B&Bs — who knew? — was a cute Victorian style home where we pulled into the driveway and drove to the back to park as my husband had been instructed to do in his confirmation email. 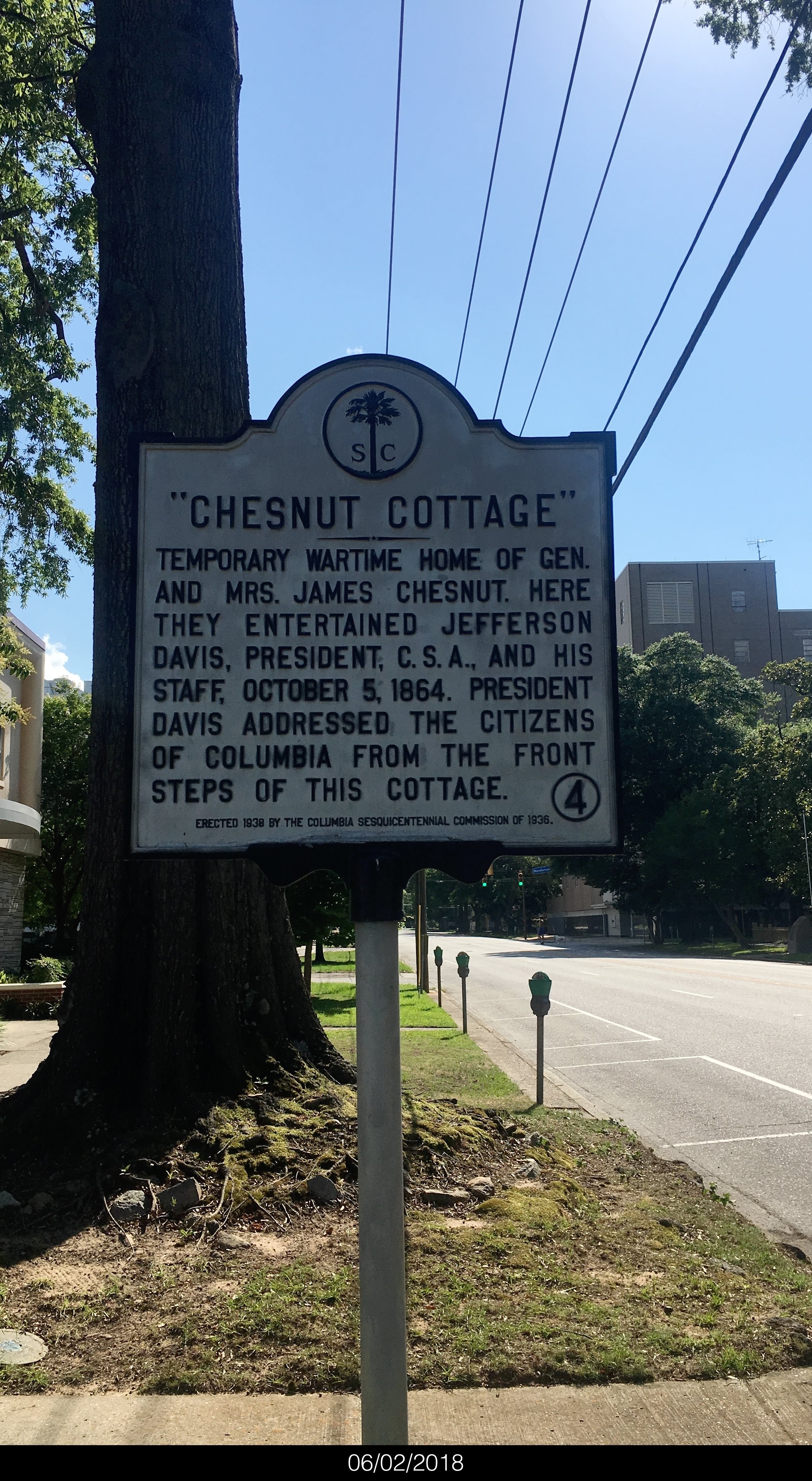 As we walked across the parking lot to the back steps we were greeted by one of the owners who was waiting to welcome us. He was very friendly and gave us a bit of history as he walked us through the house to our room. He gave us a code to let ourselves in and out of the property and told us all of the need-to-knows about coffee, tea, snacks, breakfast, check-in, check-out, etc. I noticed as we walked through the house some of the creakings of the original wood floors which adds to the property’s charm. 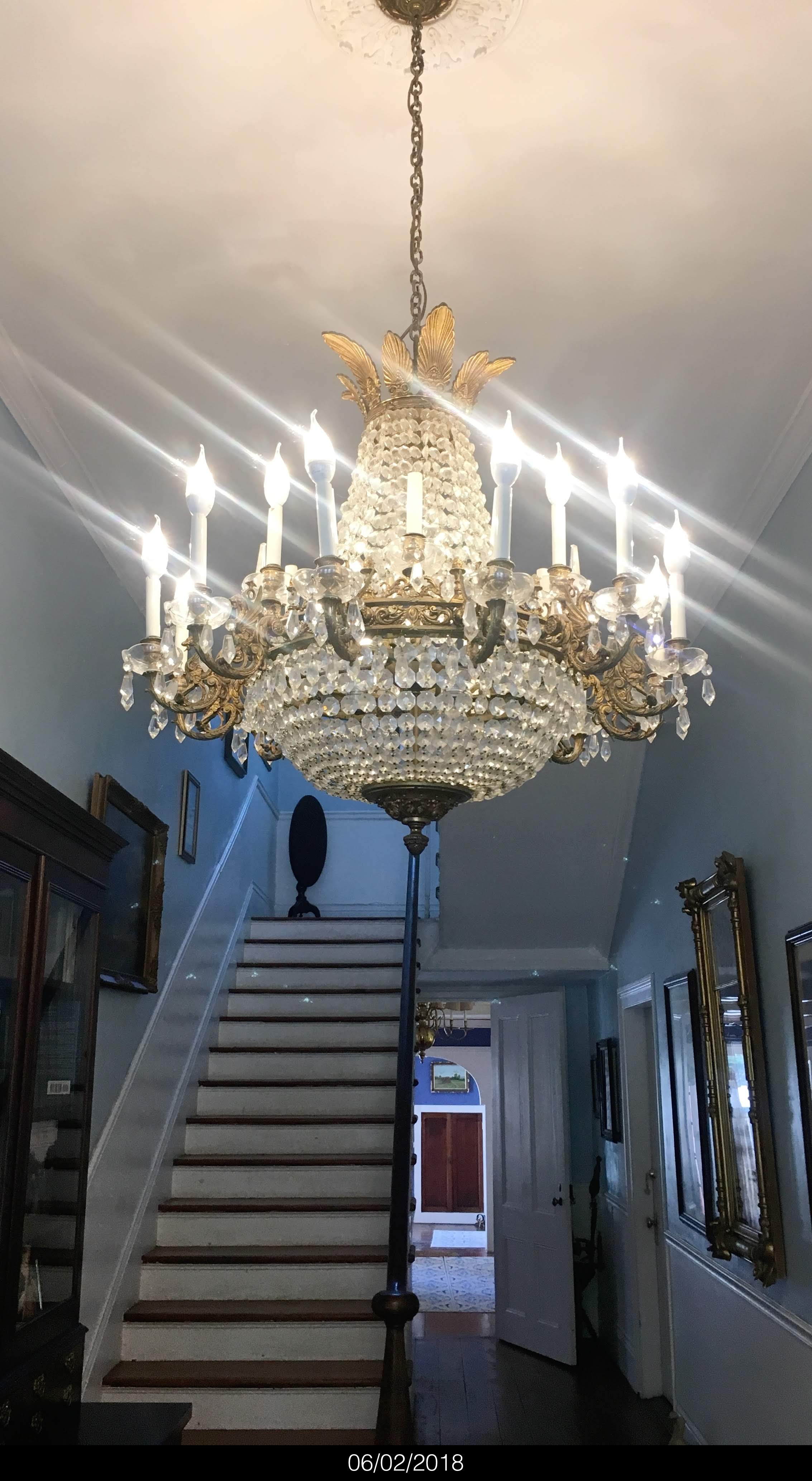 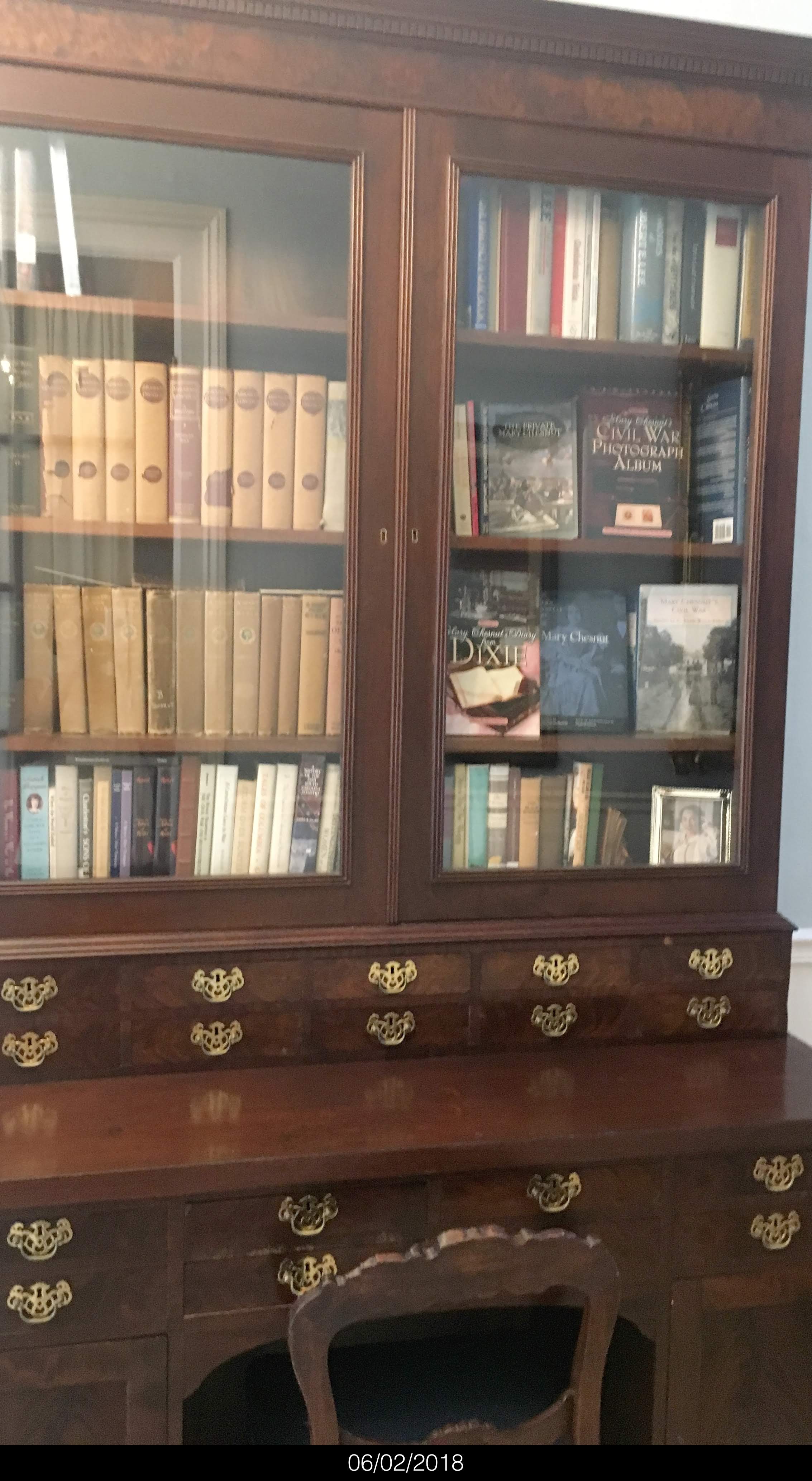 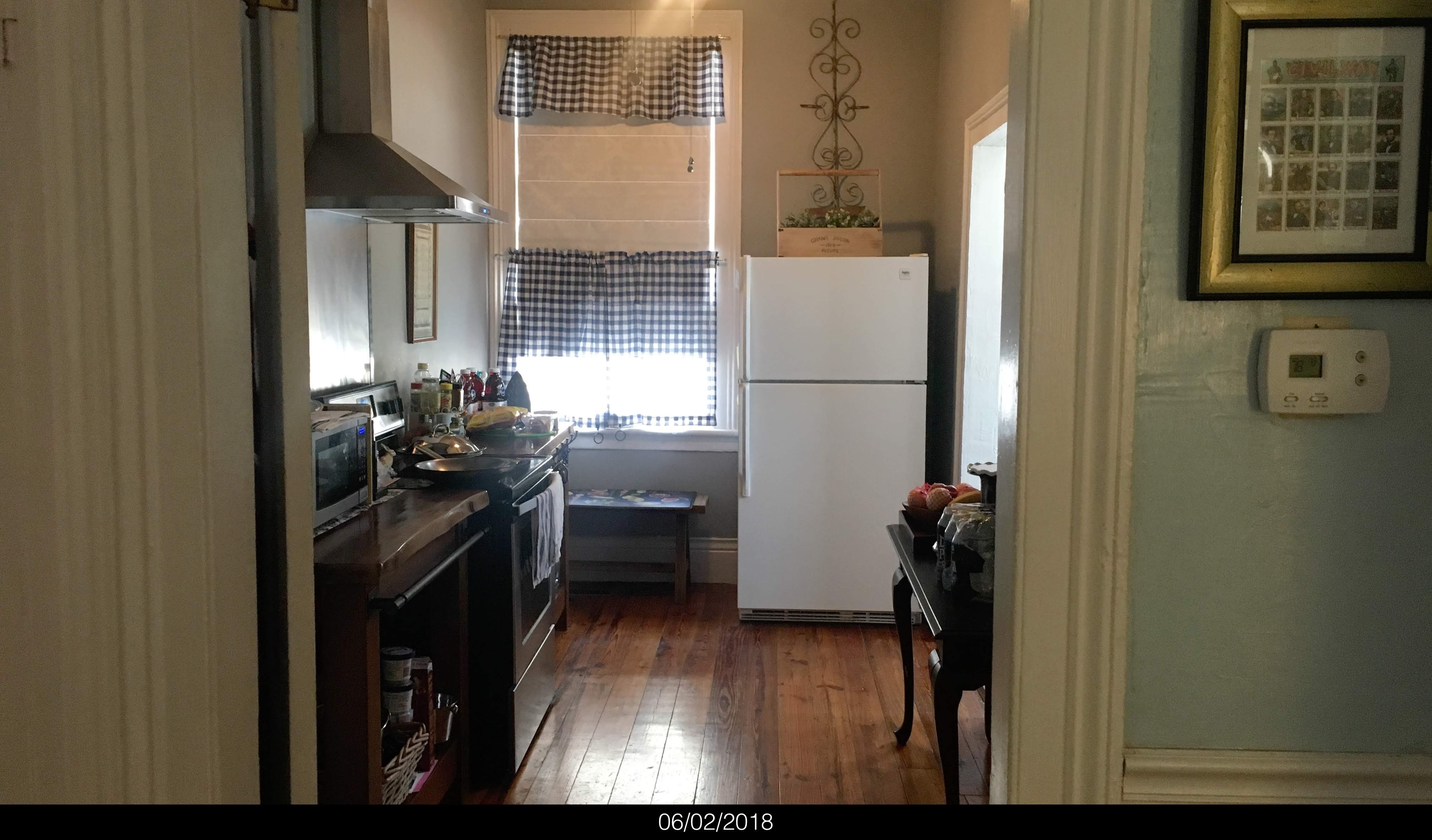 We got our luggage, and immediately went and sat on the swing on the front porch and just enjoyed the peaceful and un-hurriedness of a Saturday afternoon downtown. After about an hour we were getting hungry and decided to drive over to Five Points to see what we could find. We settled at Yesterday’s Restaurant & Tavern where I enjoyed the Black Bean Burger and fries, and my husband had the Yesterday’s Club with fries. After dinner, it was still light out so we strolled through Five Points taking in some of the history of the area before popping over to the Food Lion on Harden Street to pick up a few in-room snacks and then headed back to Chesnut Cottage. 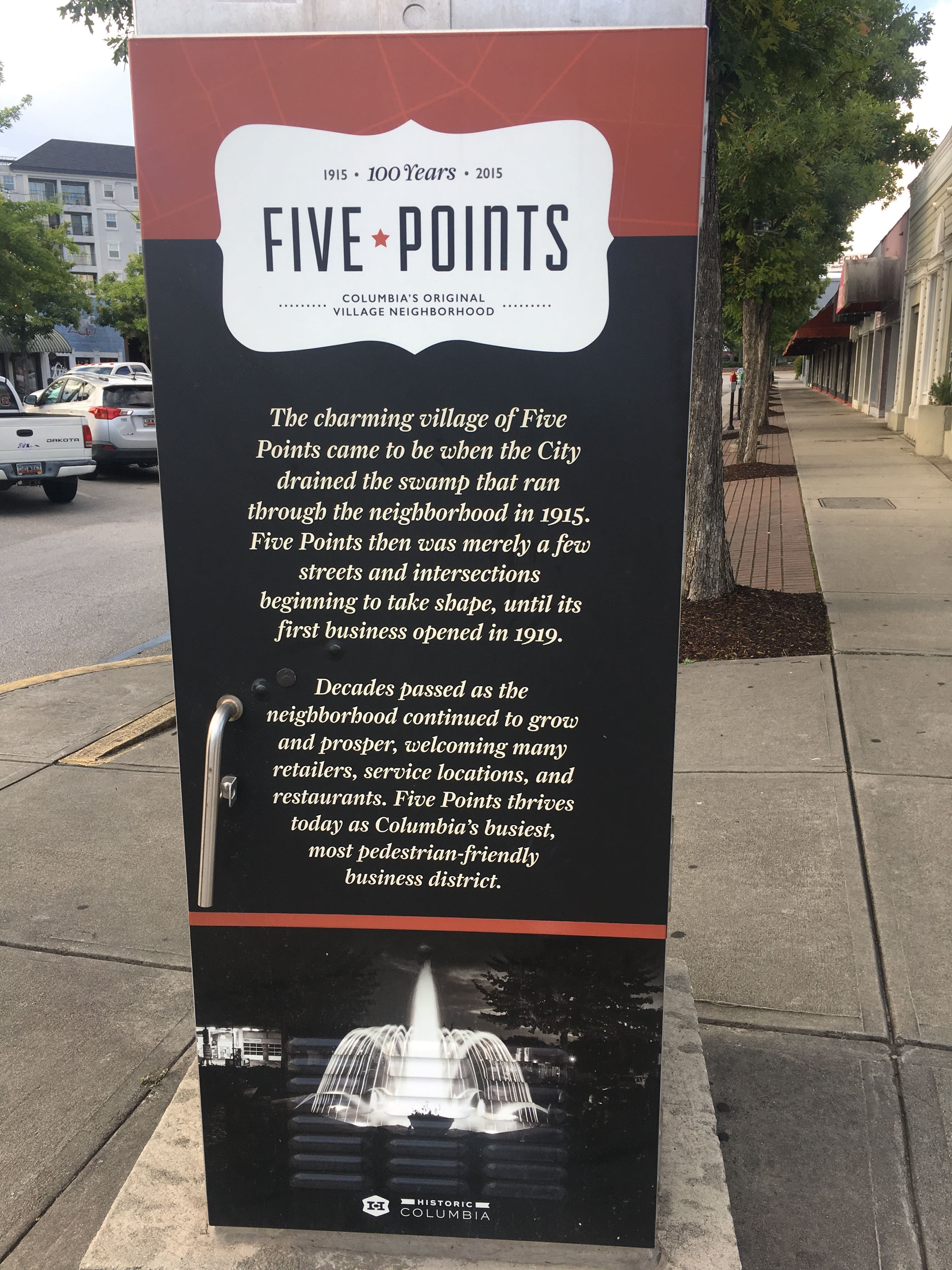 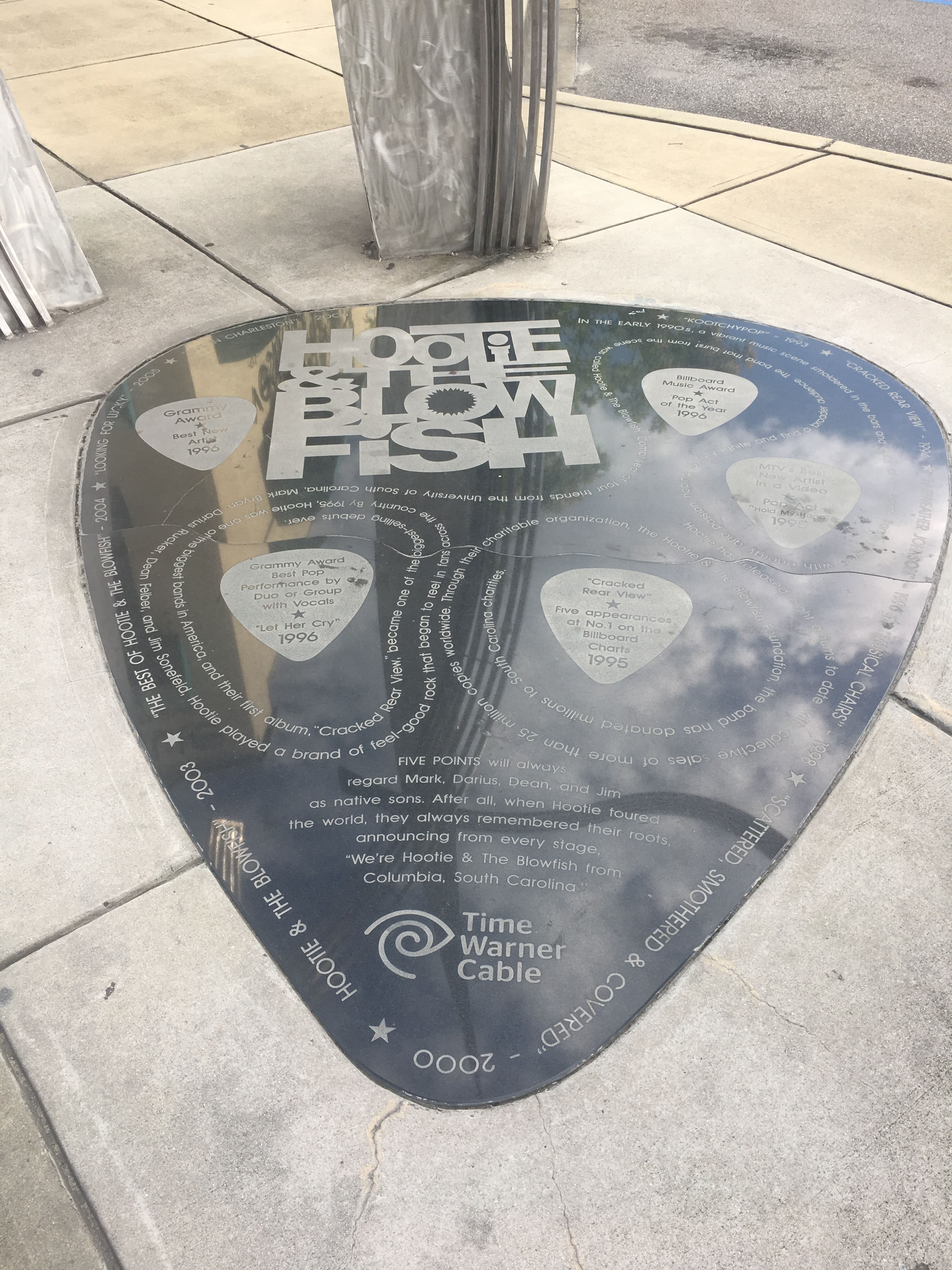 We stayed in the Jefferson Davis Room which was the perfect size for the two of us — small but not too small, and roomy without being too big — perfect. I enjoyed a very relaxing bath in the large jacuzzi whirlpool tub while my husband laid back on the bed watching television. We found a movie to watch after my bath, enjoyed our Food Lion snacks, and experienced a peaceful, and comfortable night’s sleep. The next morning we were served breakfast in our room, and I was all but too thrilled that the owners made an effort to accommodate my plant-based request. The table we had to dine on was tiny, but we managed because we understood that it adds to the quaintness of the room and a large, overbearing table would be out of place. 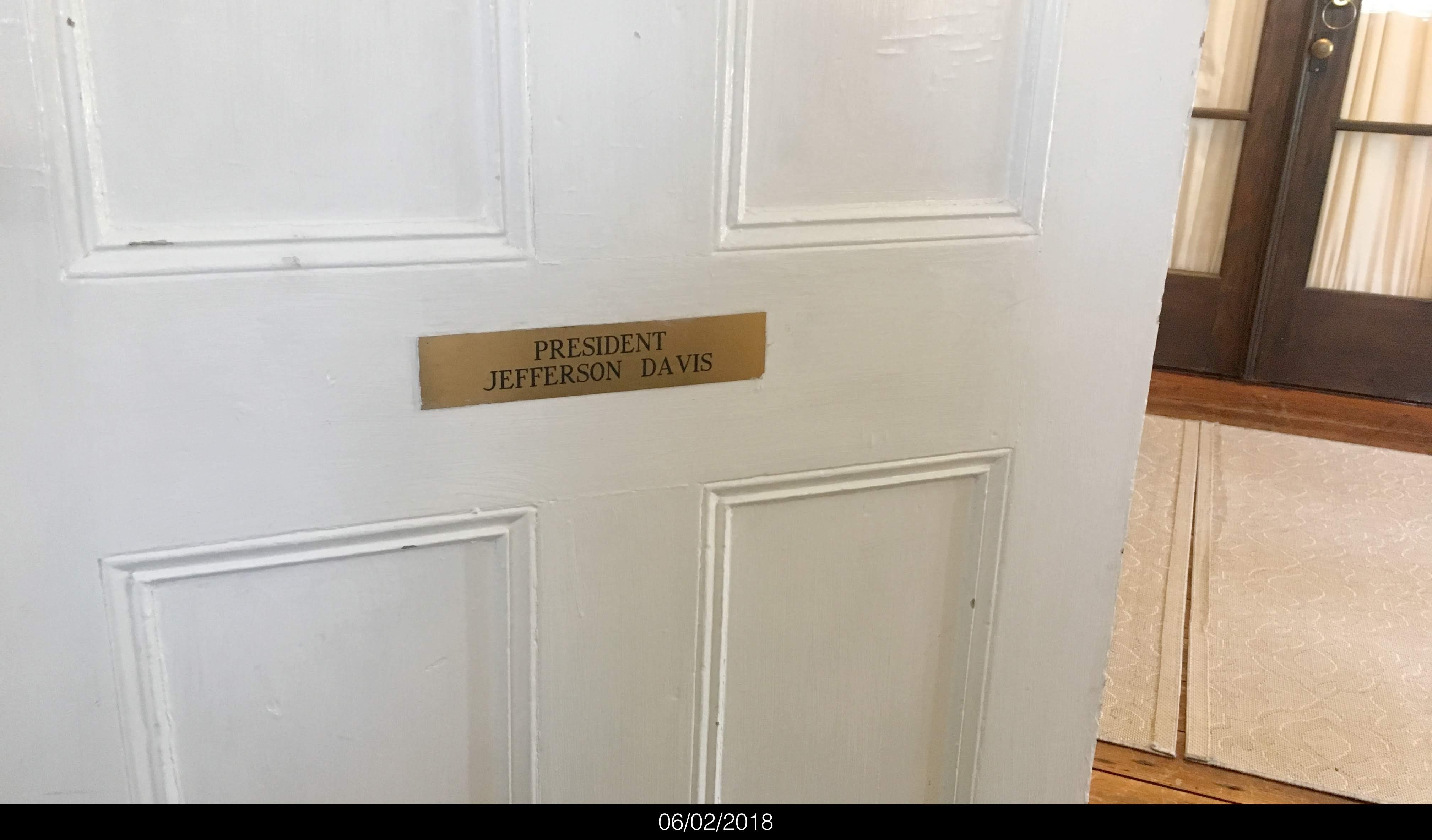 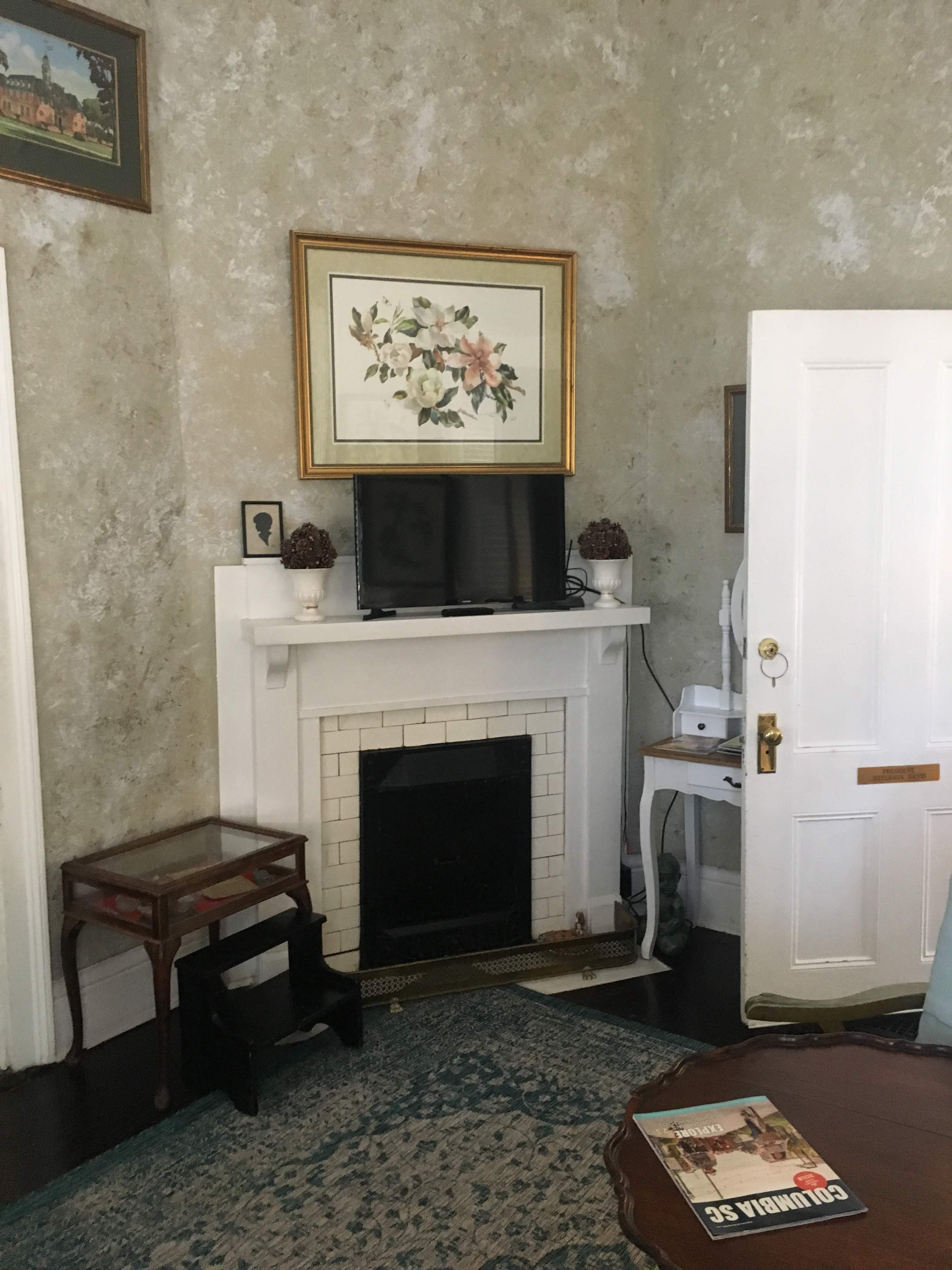 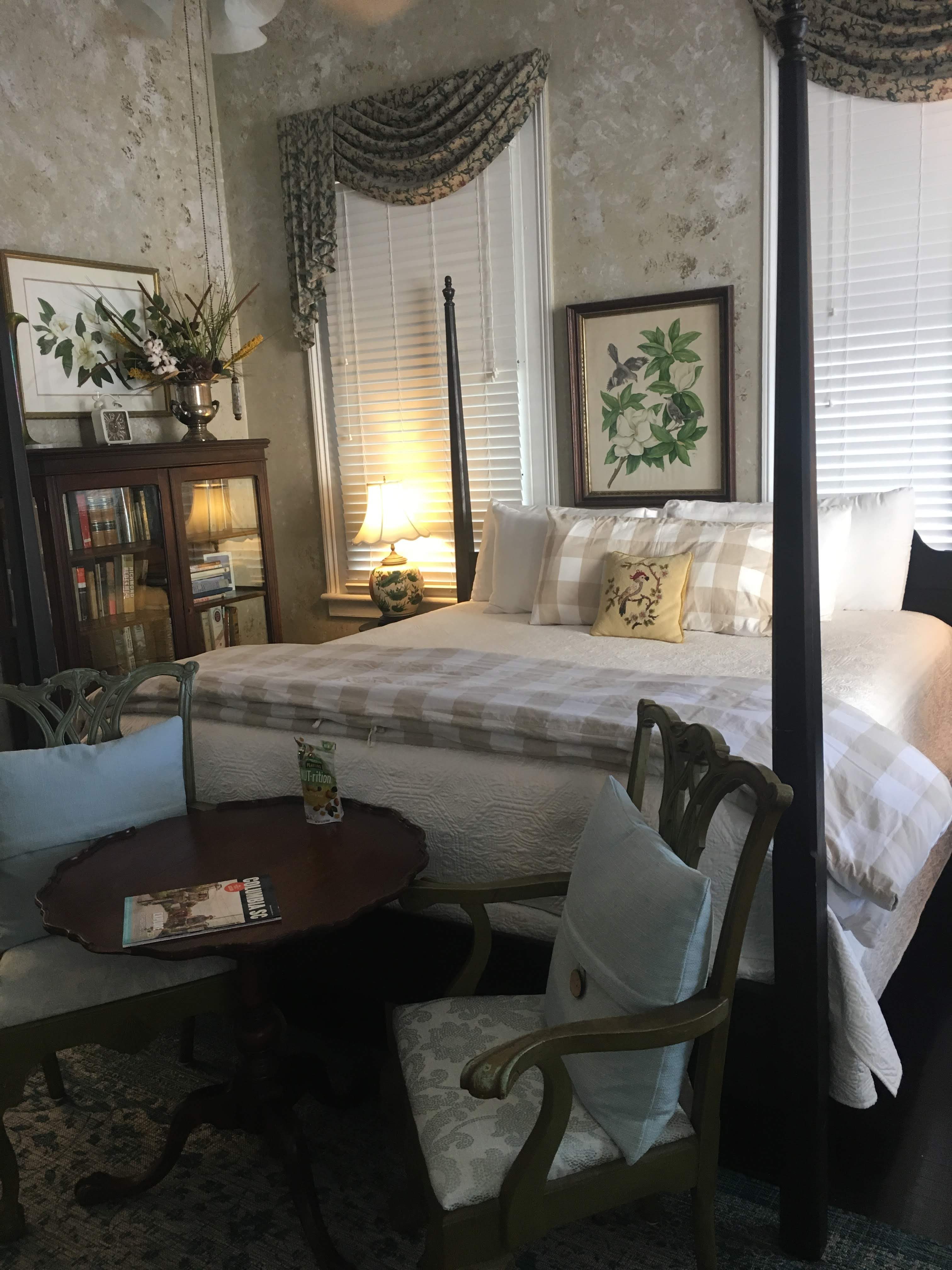 After breakfast, we began getting ourselves together for departure and thanked our hosts for a lovely stay. After we arrived home and I was unpacking, I all but realized that I had left my phone charger in the Jefferson Davis Room by the bedside table. I called the cottage, told them I was heading back — the beauty of being 20 minutes away — and my mom and I drove back out where the owners once again greeted me like an old friend. I retrieved my charger and left feeling like this is a place I would definitely recommend, and one that provided the quick break from the regularly scheduled routine that we both needed.

Should you decide to visit Chesnut Cottage The Bed and Breakfast, know that there are no restaurants within close walking distance, but both The Vista and Five Points are within short driving distances, and both offer a wide variety of dining options and nightlife entertainment (please see small but serious caveat below). Food Lion and Walgreens are both in the Five Points vicinity if you find yourself in need of snacks, toiletries, or a pharmacy. For nighttime strolling, especially during the warm summer months, you’ll find more foot traffic up and down Gervais Street in The Vista area, and from what I understand, is a safer option than Five Points after dark. And here’s the little caveat I mentioned earlier: I do not have firsthand experience with that last statement but have been told by numerous longtime residents that Five Points is best enjoyed during daylight.

Whether you live locally or are willing to make the drive, I highly recommend Chesnut Cottage The Bed and Breakfast in downtown Columbia, SC. The charm, the hospitality, and the attention to detail to keep the home as close to its original splendor all make for an enjoyable retreat. Even if it is 20 minutes away.

Share with your friends as they may appreciate it as much as you do!